HAVERHILL, Mass. – After four exhilarating and heart-throbbing playoff games the New England Edge Bantam A Team can call themselves Champions.

A roller coaster playoff ride, the Edge used two third period comebacks, including an overtime winner by Nick Mackenzie in the semi-finals, to propel the Edge to Championship Glory.

The Edge finished the season in third place in the Bantam West National Division with a 15-9-2 record. The third place finish earned the Edge a first round playoff bye.

In the quarterfinals, the Edge took on No. 6 Andover defeating them 6-4 with a complete team effort. The Edge jumped out to a 3-0 lead and a 5-2 lead controlling the game from start to finish. With the win, the Edge then moved onto the semi-finals to take on their year-long nemesis No. 2 Nashoba.

Nashoba held a 1-0 lead late into the third period when Mackenzie blasted a shot from just inside the blue line finding the back of the net to tie the game at one. Then with 50-seconds left in the game Hayden Austen buried home a rebound to give the Edge a 2-1 lead and what appeared to be a come-from-behind win.

However, the roller coaster ride continued as just 20-seconds later Nashoba crashed the net scoring to tie the game at 2-2 with 30-seconds left in the game. With the game in overtime it was Mackenzie who buried the puck in the back of the net sending the Edge to the Bantam West National Division Championship Game against No. 5 Acton-Boxboro.

In the Championship Game, the Edge took an early 1-0 lead on a goal by Matthew Tataronis, but shortly after Acton-Boxboro responded to tie the game at 1-1.

In goal for the Edge, especially during the first and second periods against Acton-Boxboro, Colton Gooden was stellar making incredible saves keeping the Edge in the game. Acton-Boxboro had several quality scoring chances only to be denied by Gooden.  Overall during the playoff run, Gooden was immense for the Edge.

Then late in the second period, Liam McDowell broke the tie scoring from the left corner sending the Edge faithful into a frenzy to give the Edge a 2-1 lead.

The third period went back and forth, including Jake Oskirko making a game-saving defensive play denying a great scoring chance for Acton-Boxboro to preserve the 2-1 lead. Then with just over a minute to play Tataronis scored an empty net goal from his own end ending any comeback hopes for Acton-Boxboro giving the Edge the 3-1 win for the Bantam West National Division Championship.

With the win over Acton-Boxboro that sent the Edge to the Bantam West Championship where they took on Waltham.

Waltham was the first on the scoreboard taking a 1-0 lead in the second period. The 1-0 lead held up into the third period, but then Dylan Carr in clutch-fashion slipped the puck five-hole for the Edge on a great pass from Austen to even up the score.

With six minutes left in the game Stephen Strong saved the day for the Edge picking up a loose puck along the Edge goal line after it snuck behind Gooden to preserve the tie.

Then with a minute left in the game Austen buried home a rebound off the back board to give the Edge a 2-1 lead.

With a minute to play, the line of Will Roncone, Nathan Pope and Brayden Goode held off a Waltham surge with Goode making a big play sending the puck down into the Waltham end. Soon after, Austen picked up the loose puck firing the shot bar down with :12-seconds left in the game giving the Edge a 3-1 win for the Bantam West Championship.

Throughout the championship run Seamus Alukonis, Cameron DeFilippo, Bailey Landsteiner and Shaun Marion all made instrumental plays to help lead the Edge to the Bantam West Championship. All four threw their bodies around leaving everything they had on the ice doing whatever it took to win the championship. 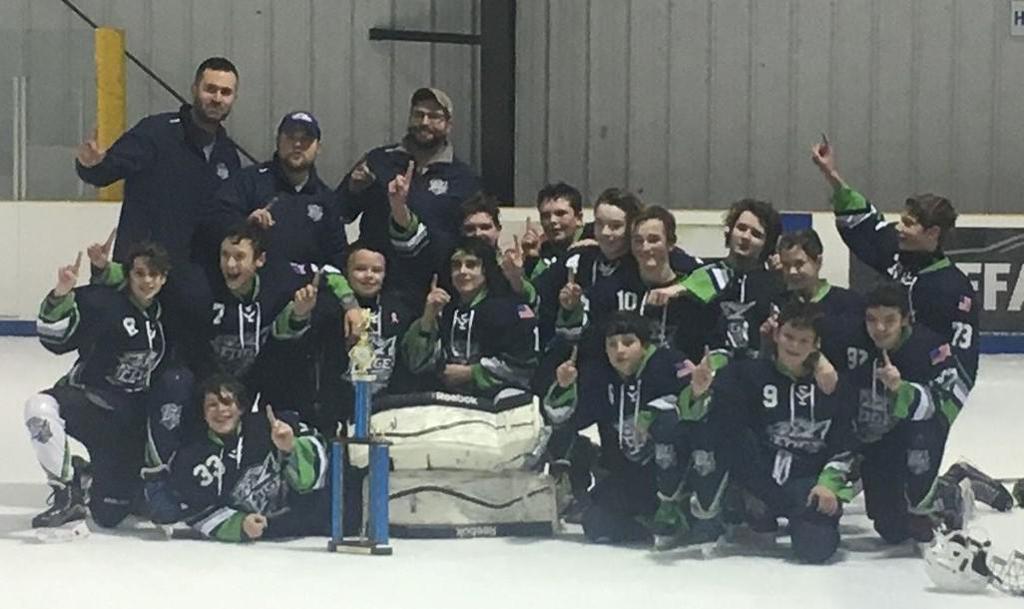